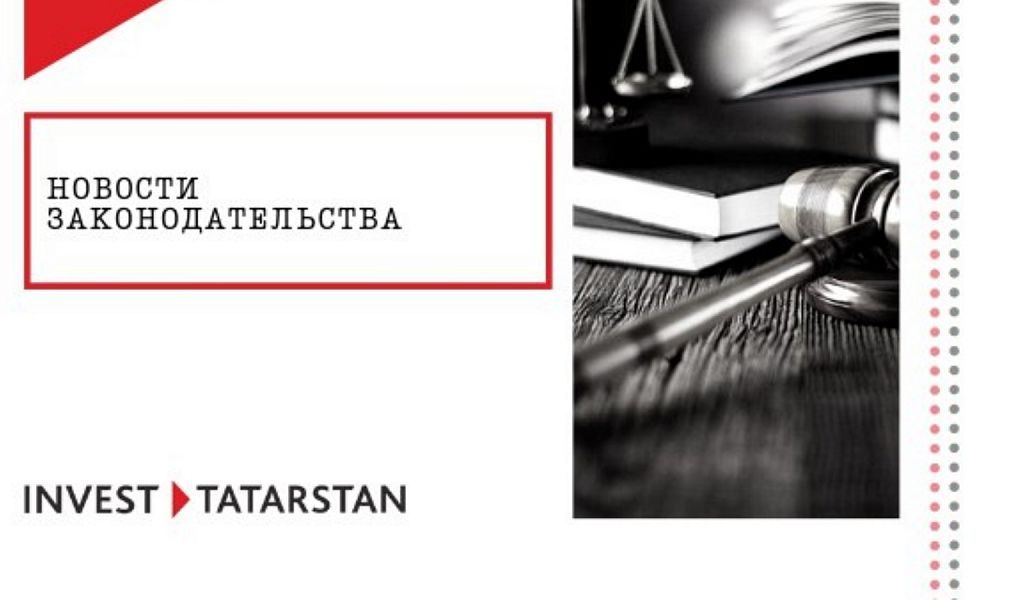 1. New legislation (amendments that have entered into force)

- PDA management companies will be able to hold contests from November 15, 2022.

Amendments were made to the Law on PDA, establishing the possibility of holding a tender by the management company of the territory of advanced development (PDA) for the right to conclude an agreement on the implementation of housing and infrastructure construction on the PDA. In case of victory in it, the person receives the status of a resident of the PDA and the benefits provided for him.

The deadline for the entry into force of these provisions has been moved to an earlier period - from November 15, 2022. Initially, it was assumed that they would be applied from January 11, 2023.

The law comes into force from the date of publication.

- The mechanism of investment protection in the SEZ has been improved

Federal Law No. 428-FZ of November 4, 2022 “On Amendments to the Federal Law "On Special Economic Zones in the Russian Federation"

A law was signed on the harmonization of legislation on SEZ and concession agreements, as well as on limiting the abuse of state support measures in the SEZ and on protecting the interests of the public side from abuse of the right by residents.

- simplification of the rules for obtaining resident status by a concessionaire;

- reduction of the number of concessionaire verification procedures in the SEZ;

- establishment in the SEZ of the procedure for calculating rent for land plots that are provided to the concessionaire.

The SEZ resident in the North Caucasus Federal District is given the opportunity to make one-time changes to the essential terms of the agreement, including changes in the qualitative and quantitative characteristics of objects and the extension of the project period up to 2 years. At the same time, a resident who is a concessionaire under a concession agreement may amend the agreement on the implementation of activities when the terms of the concession agreement change.

There is a moratorium on changing the agreement during the trial with a resident. The time limits under which liability for violation of the essential terms of the agreement does not occur have been reduced. According to the decision of the Government, the expert council may temporarily stop considering new applications for SEZ resident status.

The law comes into force from the date of its official publication.

Income tax payers on the basis of a regional law have the right to apply an investment tax deduction in the amount of no more than 100% of the amount of expenses in the form of the value of property (including money) donated to educational organizations implementing basic programs that have state accreditation.

The deduction is applied at the location of the taxpayer or its separate divisions. At the same time, the taxpayer (its separate subdivisions) and the educational organization to which the property has been transferred free of charge must be located in the territory of the region that granted the right to apply this deduction.

The regions independently determine the maximum amounts of expenses in the form of the value of property and the types of property donated to educational organizations, as well as the list of basic educational programs implemented by them.

The law comes into force one month after its official publication, but not earlier than the 1st day of the next income tax period.

Regions in which businesses can use the investment deduction for income tax will continue to receive partial compensation for the loss of income. The procedure for calculating the amount of the subsidy has been clarified.

Subsidies are provided to regions that have confirmed the implementation of a system to support new investment projects.

- "Project Finance Factory": the burden on investors has been reduced, the total volume of lending has been increased

The "Project Finance Factory" was launched in 2018 and provides for the issuance of large preferential loans for the implementation of investment projects worth from 3 billion rubles in priority sectors of the economy. Several banks and the state corporation VEB are acting as creditors at the same time.RF". They provide the borrower with a syndicated, i.e. joint, loan. The operator of the program conducting the selection and examination of projects is VEB.RF".

The changes made soften the requirements for borrowers. In particular, the share of investors' own funds for projects approved in 2022-2023 has been reduced from 20 to 15%. At the same time, the share of participation of "VEB.The Russian Federation" in the financing of such projects is up to 25%.

Also, the total amount of funds that VEB can allocate to borrowers under profile applications has been increased from 294 billion to 500 billion rubles.

In addition, it is allowed to launch a new investment cycle on the basis of existing companies - without the formation of additional legal entities.

- How are contracts with counter investment obligations concluded?

Letter of the Ministry of Finance of the Russian Federation dated November 22, 2022 N 24-01-07/114061 “On the conclusion of contracts with counter investment obligations”

The legislation does not contain restrictions on the type of customer in procurement, providing for the conclusion of a contract with counter investment obligations.

A region may assign the authority to plan purchases, identify suppliers, conclude contracts and execute them to one executive authority or one state institution, which may become customers under a contract with counter investment obligations to meet the needs of several executive authorities, state-owned, budgetary institutions and state unitary enterprises.

The terms of the contract with counter investment obligations may be changed if the price of the contract concluded for a period of at least 3 years is or exceeds the price set by the Government, and the execution of the contract for circumstances beyond the control of the parties without changing its terms is impossible.

Decree of the Government of the Russian Federation of November 24 , 2022 No. 2139 "On Approval of the Rules for the Implementation by the Subject of the Russian Federation, which is an Independent Party to the agreement on municipal-Private partnership, the Object of which are transport infrastructure facilities and Technologically Related Vehicles Providing Activities Related to the Transportation of Passengers by public Transport, with the Exception of the subway, and the public partner of which is the municipality, control for the execution of such an agreement, requirements for the composition of the results of the implementation of the stages of the municipal-private partnership agreement ..." (the document has not entered into force)

The control over the execution of the municipal-private partnership agreement, the object of which is the transport infrastructure for passenger transportation (except for the metro), has been regulated. We are talking about an agreement in which the region conducting this control is an independent party, and the municipal entity acts as a public partner.

Controlled persons are public and private partners. The region monitors the fulfillment of their obligations under the agreement. The documentation related to the activities stipulated by the agreement, the results of the implementation of the stages of the agreement are monitored.

The general rules for monitoring the implementation of the agreement on public-private and municipal-private partnership have also been adjusted. It is clarified that if the private partner has not eliminated the identified violations within the prescribed time, the public partner has the right to apply to him the liability measures provided for by the agreement. Previously, the right of a public partner to apply to the court with an application for early termination of the agreement was fixed.

Technical equipment, components and spare parts for it, raw materials and materials necessary for the implementation of investment projects corresponding to priority activities (sectors of the economy) In Russia, they can be imported with the application of a tariff benefit. Lists of such projects and products have been established.

The list includes 4 projects. One of them provides for the creation of the production of hulls for self-propelled tracked vehicles.

Decree of the Government of the Russian Federation No. 2200 dated December 1, 2022 "On conducting an experiment on consulting on the Compliance of Activities Planned for Implementation during the Implementation of Investment projects by Legal Entities or Individual Entrepreneurs with the requirements of legislation in the field of environmental protection and nature management"

From December 1, 2022 to December 31, 2023, Rosprirodnadzor will advise organizations and sole proprietors on the compliance of their activities within the framework of investment projects (both ongoing and planned) with the requirements of legislation in the field of environmental protection and nature management.

The relevant applications are submitted through the Service's website. Based on the results, a motivated opinion is formed on the issues of compliance with the legislation and the correctness of the calculation of the fee for NVOS and (or) environmental fee.

The procedure for state financing of projects implemented within the framework of investment projects for which agreements on the protection and promotion of investments have been concluded has been clarified. The changes relate to the types of reimbursable expenses and their standards. So, you can count on full cost recovery:

- to create the accompanying infrastructure necessary for the implementation of the investment project;

- to pay interest on loans and borrowings, coupon income on bond loans attracted for the creation of related infrastructure;

- for the dismantling of facilities located on the territories of military camps (in terms of housing construction).

WEB. RF transferred the functions of analyzing documents provided by the organization implementing the project in order to reimburse costs.

The conditions of subsidizing have been clarified. General requirements have been established for regulatory legal acts regulating the provision of subsidies from regional budgets to organizations implementing projects within the framework of investment projects for which the NWPC has been concluded.

For 2023-2025, 50% of the tax amount is set by the management companies of the industrial-production type SEZ in respect of property created for the purpose of implementing agreements on the creation of the SEZ, recorded on the balance sheet of the management company as fixed assets, after ten years from the month following the month of registration of the specified property.

On November 9, 2022, the State Duma in the first reading adopted a bill according to which:

- according to the decision of the Federal Forestry Agency, forest plots located on the lands of the forest fund will be provided for the implementation of priority investment projects in the field of forest development;

- to obtain forest plots for the purpose of harvesting wood, it is necessary to have processing facilities.

The grounds and procedure for the unilateral refusal of the lessor from the execution of the forest lease agreement are determined.

On December 6, 2022, the State Duma in the first reading adopted a bill aimed at ensuring the safety of heat and water supply facilities, which are among the critically important facilities.

Thus, it is proposed to introduce a ban for legal entities registered in foreign countries or on their territories that provide a preferential tax regime for taxation and (or) do not provide for disclosure and provision of information during financial transactions (offshore zones), or that are under the direct or indirect control of such persons, to act as concessionaires for heat supply facilities, centralized systems of hot and cold water supply and (or) sanitation, individual objects of such systems.