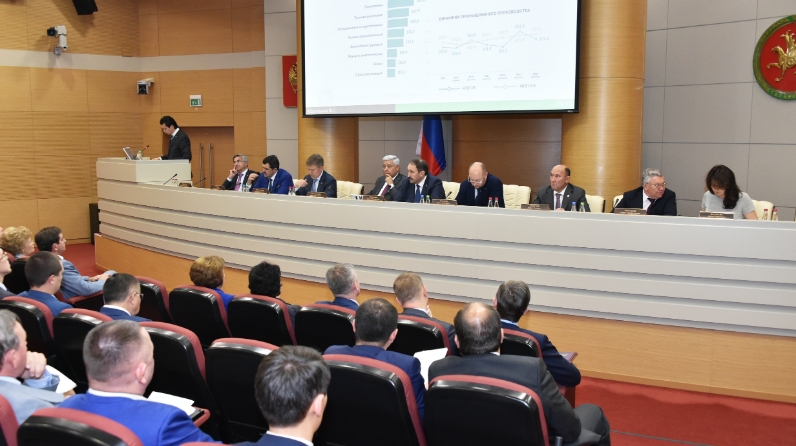 “According to the results of 2019, the gross regional product volume will reach 2 trillion 552.5 billion rubles with a growth rate of 101.3%. In 2020-2024, the GRP growth is projected in the range of 102-103.3%. First of all, the growth will be ensured by an increase in production volumes in manufacturing industries and by the implementation of large investment projects,” said Farid Abdulganiev, the Minister of Economy of Tatarstan.

Among economy-relevant investment projects there are the projects of JSC TANECO, JSC TAIF-NK, PJSC Nizhnekamskneftekhim, PJSC Kazanorgsintez, tire complex of Tatneft-Neftekhim Managing Company, PJSC KAMAZ, S.P.Gorbunov Kazan Aircraft Production Association – a branch of PJSC Tupolev, PJSC Kazan Helicopters and others. In view of the planned commissioning of capacities, the industrial production index in 2020-2024 is projected at 101.3-103.8%, with investment growth rates of 101.2-101.9%.

In order to support small and medium enterprises, there are plans to increase the number of infrastructure facilities to 100, and the number of SEZ to three. This year, the Ministry of Economy of Tatarstan has prepared a request to establish the AlmA SEZ. By 2025, the investment volume of its anchor residents will reach 67.9 billion rubles, more than 1.4 thousand new jobs will be created.

The key task for the forecast period will be the development of small and medium enterprises. The turnover of SMEs in 2024 will be about 1.7 trillion rubles.

The growth rate of the construction sector in the context of the increase in housing and infrastructure construction in the framework of national projects will be 100.2-103.5%.

The retail sales will grow at the level of 101-102.5%. The E-commerce will hold ever-greater share.

“The implementation of investment projects, the increase in commodity turnover of countries and regions, the development of small and medium enterprises are traditionally the key factors in strengthening the economy of the region. Over the 9 months of the last year, the plan to attract foreign investments has already been fulfilled by 89.7%. Tatarstan has good relations with investors from the USA, Turkey, China, the United Arab Emirates, Germany, the Czech Republic, Japan, and Israel. The washing machine plant and Haier Industrial Park are among the largest projects launched this year. This year as well, the works to construct cargo terminal, protected special vehicles plant, sports equipment plant, and grain processing plant are to be launched which helps to create new jobs,” said Taliya Minullina, the Head of the Tatarstan Investment Development Agency.

In general, according to the Minister of Economy, the forecast for the social and economic development of Tatarstan complies with the basic scenario of Strategy-2030, according to which the Gross Regional Product should exceed 5 trillion rubles in 2030.