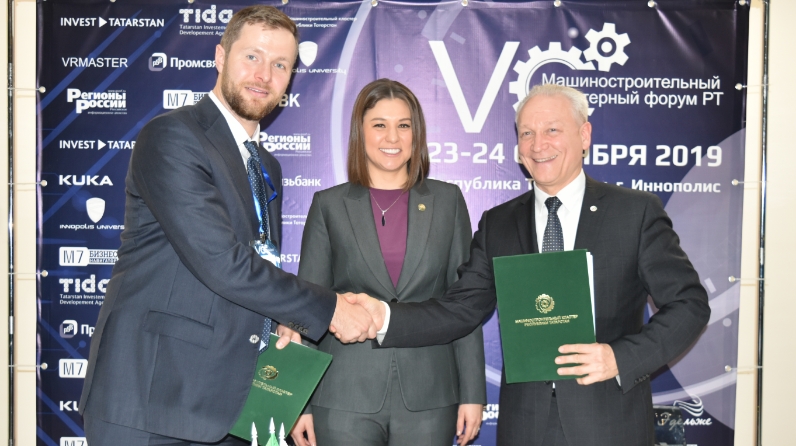 At the site of the V machine-building cluster forum in Innopolis 1000 specialists from 14 countries, 44 regions of Russia plunged into the transformation of production. The theme of the anniversary forum was "Industry 4.0-matrix production, increasing productivity without reducing the staff".

The event is traditionally held by the machine-building cluster of Tatarstan together with the Tatarstan Investment Development Agency, which aims to transfer the best world and Russian experience of digitalization within industrial sphere, the formation of a macro-regional strategy for the development of the machine-building industry, allied industries and the implementation of cooperative investment projects in Russia.

"Machforum and its result in the form of a consortium of those companies, which come here since together we are a power, and only together we can come up with new solutions," said Taliya Minullina, the Head of the Tatarstan Investment Development Agency.

KUKA (Germany) became the General partner of the forum this year. PJSC "Promsvyazbank", Innopolis University, the industrial robot integrator "BP-master" and "Edelje" acted as the partners of the event.

Stanislav Natanzon, TV presenter of the channel “Russia 24”acted as the moderator of the plenary session and his first revelation was: "Tatarstan is love at first sight!” Returning to the economic realities, the guest noted that improving labor productivity is one of the priorities set by the Russian President Vladimir Putin's May decree. Technology, robotics and process automation play an important role because they are vital for its realization. These factors stand for 10 percent of GDP growth. Taliya Minullina, a co-Chair of the Supervisory Board of the Machine-building cluster, noted what was the first thing to focus on.

"I can not say that our country is the first in the arena of digitalization, but I would very much like to do that. Tatarstan is an industrial region; therefore making our industry really advanced is indeed vital for us. We have the best investment infrastructure in Russia: almost 100 industrial parks, 5 territories of advanced social and economic development, 2 special economic zones.

The problems of entrepreneurs are our problems. It is necessary to reduce production costs. Digitalization is meant not just as a duplication of the whole enterprise, but the digitization of all processes and as the result of which we can identify where at what stage we can save. And, of course, it is the transparency of processes. Russian and Tatarstan enterprises should actively use measures of state support in order to digitalize their production," said Taliya Ilgizovna at the plenary session.

Members of the machine-building cluster are involved in the implementation of almost every national project, which is executed, primarily, at the expense of human capital.

"National projects are not some ephemeral things, figures, programs. This is us. Each of us can make them work. We are responsible for the country we live in. If everyone will make an effort to ensure that their workplace is digitalized, the whole country will make an economic breakthrough," said Taliya Minullina.

Within the framework of the forum's two-day program, a number of thematic events and round tables were held to study the prospects of cooperation. Participants also visited Technopolis "Khimgrad", "SEZ "Innopolis", Engineering Center "Energoprogress", "Zarnitsa", "Neon-Art-M", "ServiceMontazhIntegratsiya", "Danaflex", "Nefis", "Tatspirtprom".

The emergence of new partnerships became an important outcome of the forum. Machine-building cluster of the Republic of Tatarstan signed a number of cooperation agreements: with KUKA RUSSIA, the Union "Togliatti Chamber of Commerce and Industry", the Support center for small and medium-sized businesses in the Irkutsk region, as well as with the Volga-Kama regional Association of concrete and reinforced concrete manufacturers.

The forum became an impetus for attracting investments. Taliya Minullina held talks with its participants on the implementation of joint projects in Tatarstan.