Public-private partnership (PPP): challenges and solutions through dialogue between government and business 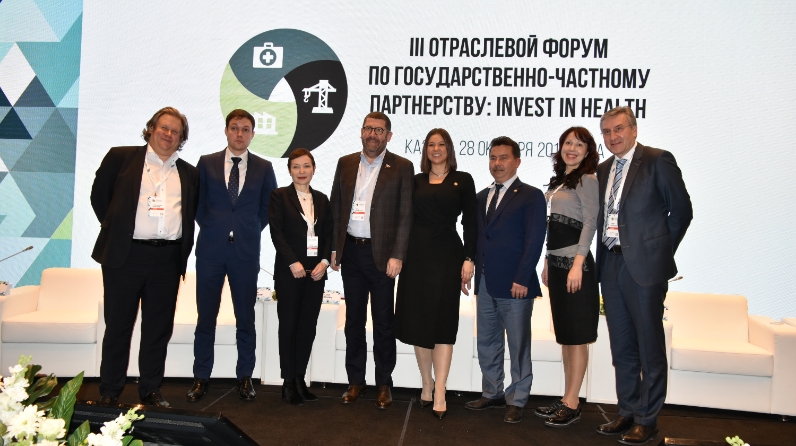 Representatives of government, business and experts discussed public-private partnership as a driver of Russia's economic development in the capital of Tatarstan at the III industry forum on PPP: INVEST IN HEALTH, which was organized by the Investment Development Agency of the Republic of Tatarstan supported by the PPP National Center. The forum was attended by more than 250 people from 15 regions of Russia, CIS countries, as well as South Korea.

The development of health care is a priority for our country. The forum examined the general economic situation, the solvency of the population, tariff regulation, territorial planning, and personnel policy in order to correctly determine the development vector. Part of the current problems can be solved through PPP mechanisms, which allow introducing innovative treatment practices, modern equipment, as well as improve the quality of medical care. PPP is beneficial to both the state, business, and the population.

The first project in Russia, implemented on the principle of municipal-private partnership, that is, in accordance with Law No. 224-FZ, was implemented in Tatarstan. The Federal Law has been discussed and adopted for five years, and at the time of its adoption, the relevance of the solution of the originally set tasks decreased, thus the law needs to undergo improvements.

The healthcare industry has traditionally been attractive to the private sector, given the need for the state to create facilities to provide the necessary medical services. However, experts note that there are constraints for investment. Guzel Ulumbekova, the moderator of the plenary session – Chairman Of the Board of the Association of medical societies for the quality of medical care and medical education, found out what this is connected with. Thus, the greatest concerns were about guarantees from the state-53.1% of votes, 32.1% voted for the fact that this industry is not as marginal as others, 9.9% of participants noted the lack of specialized professionals, 4.9% - the complexity of forecasting consumer demand.

"Attracting investors to the healthcare sector is a very difficult issue. This area has less than 1% of foreign investments.  The majority of Russian and foreign private investment goes to the manufacturing industry. Of course, we are diversifying the economy and trying to move away from this. The IT sector, agriculture, petrochemicals are being developed and we pay attention to social needs. Successful concession agreements, which concern the opening of medical centers,have been implemented since 2011, including the ones for the restoration of reproductive health and artificial insemination, cancer treatment using hemodialysis and tomotherapy technologies, rehabilitation of children with cerebral palsy. The extensive use of PPP opportunities in health care enables entrepreneurs to earn, the state to save, and the population to receive better medical services. Interest in this regard is shown by Asian companies like Japanese, Korean, Chinese, " said Taliya Minullina, the Head of the Tatarstan Investment Development Agency at the plenary session.

What area of healthcare has the greatest potential for investment was found out through voting among the forum participants. 41.7% of the votes went to oncology, 28.3% to the pharmaceutical industry, 11.7% each to primary care and rehabilitation, 5% to the medical industry, 1.7% to geriatrics while palliative care was left without the support of the hall.

The results of the vote caused a heated discussion. Marat Sadykov, Minister of Health in Tatarstan, noted that in his opinion there are many more opportunities in the medical industry.

"Taliya Ilgizovna, you have raised a serious problem that is relevant to all countries of the world, including developed ones. Healthcare opportunities are growing. Services become more expensive, as the job gets harder doctors want to be paid more. From the point of view of the budget, we have to work through optimization. It is right to create conditions for private capital, and this is an additional investment. Planning is extremely important, we need to do everything at the regulatory level. The key problem is connected with personnel," commented AiratFarrakhov, the Deputy of the Russian Federation State Duma of the VII convocation.

The representatives of financial institutions confirmed the need for emphasis in favor of PPP.

Experts unanimously expressed great interest in the expansion of cooperation. "The Republic stands as an absolute leader in the field of health care, PPP. I can see how much progress it has made in this regard in comparison with the entire territory of the Russian Federation. We [ed .: Rosatom (Russian Federal Atomic Energy Agency)] want to create a nuclear medicine industry and plan to actively work within the framework of the national project. PPP in Russia is a rather complex and time-consuming process and it needs to be pieced together since it is decentralized.

Everything depends on the people. If we want to, we will do that. Rosatom is indeed interested in cooperation with Tatarstan in all manifestations, as far as it is possible. We are ready to move the whole division, in close contact to create the projects that are necessary for the framework of PPP," said Olga Yesaulova, the Director of PPP development, Advisor to the General Director of JSC "Rusatom Helskea".

On the sidelines of the forum, an Agreement on cooperation between the Tatarstan investment development Agency and the South Korean company Ceragem was signed and it provides for the placement in the Republic of Tatarstan of high-tech equipment in medical institutions and the opening of medical centers. The uniqueness of this equipment is that it affects the spine, releases pinched spinal nerves and restores the internal work of organs.

Expert discussions continued throughout the day. Strategic sessions on the exchange of experience, revision of the regulatory framework of PPP projects in health care, a panel discussion on attracting private investment in the industry were held within the framework of the forum program.

The forum conclusions will be recorded in the form of the resolution and become recommendations for the country’s specialized professionals.